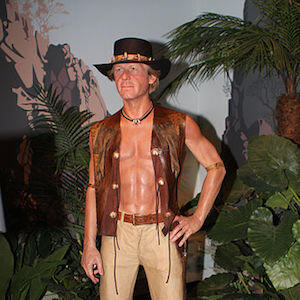 Most of the 23 million people that live in Australia call a thin line around the bottom right edge of Australia ‘home’ and, despite the proliferation of four wheel drives in the suburbs, very few have actually tested their abilities on anything other than a tarmac road.

Although it’s almost the size of the continental United States, huge areas of Australia are ‘offroad’, and this is exactly where Anthony Gomes feels most at home.

Anthony, a registered teacher, is generally the only white person in the communities he works with, where he works as a homelands teacher. A homelands teacher lives and works in the communities he supports, which could be anything from just one to eighty-five dwellings. Trained as a pre-school teacher, Anthony has been teaching in remote areas for over fifteen years, from pre-school level all the way up to adult education, spending four days every week camping out in the bush.

Despite the fact that he is ‘off grid’ for four days every week – so no internet connection and no mobile phone reception, he also runs a publishing business called Creative Croc, which publishes a number of magazines and websites, including The Cape Yorker magazine. He also writes for a number of other local and national publications on hunting and fishing, and living in the Outback.

Recently he did a lot of work with Oprah Winfrey’s TV company, helping them to film an episode of a new documentary series due out in the US in September this year, called ‘Beliefs’. The series will cover a range of cultures and beliefs around the world, and Anthony was instrumental in getting the Australian episode completed, working closely with the local community and the film company to make sure that everything went smoothly, not an easy task when you realise that English is a third or fourth language for many of the indigenous communities and the leaders of those communities in remote areas.

“I’ve worked with a number of remote and indigenous communities in my career, and the communities I am working in at the moment are the ones that have to a very large degree retained their cultural practices, beliefs and ceremonies. It was great to be able to help the film company record some of this for their documentary series, and help them to work closely with the community to achieve an outcome that both parties were happy with.” said Anthony.

When he’s not teaching or writing, Anthony spends his time filming and hunting. It may seem like a strange combination, but the two are closely linked. He has a number of remote control ‘multirotor’ aircraft – these are small aircraft, sometimes (wrongly) referred to by the media as ‘drones’ which he can pilot remotely via a technology called FPV. This involves donning a helmet with the image from the videocamera on the aircraft projected onto the inside of the visor. Using these tricopter or quadcopter multirotors Anthony is able to shoot stunning HD footage of the landscape and the movement of the wildlife around it.

And the connection with hunting? Amazingly, these devices can even ‘herd’ animals. On one occasion he was able to find a herd of buffalo that had been lost by a group of hunters and he was able to corral the herd back towards his colleagues using the multirotor!

Anthony is a keen hunter and, with introduced ‘feral’ buffalo now in very large numbers in outback areas in the NT, buffalo are open season. Unlike the rangers, who run a culling program where they shoot the buffalo from helicopters and then leave the carcass in situ, Anthony and his colleagues hunt the buffalo for meat, using the meat from a 1000kg beast for human and animal consumption.

This is where Anthony relies on a Nirey KE3000 electric knife sharpener to keep all of his hunting knives sharp, and you can read what he has to say about his Nirey here: Read on if you’re a serious hunter.

Unlike Crocodile Dundee, he doesn’t wear a hat with corks dangling from it and prefers to go barefoot rather than wear shoes, even when he’s out hunting. He does have a large Bowie style knife though…

Check out Anthony’s Creative Croc website, and watch some of the videos he has shot from his collection of multirotors here.