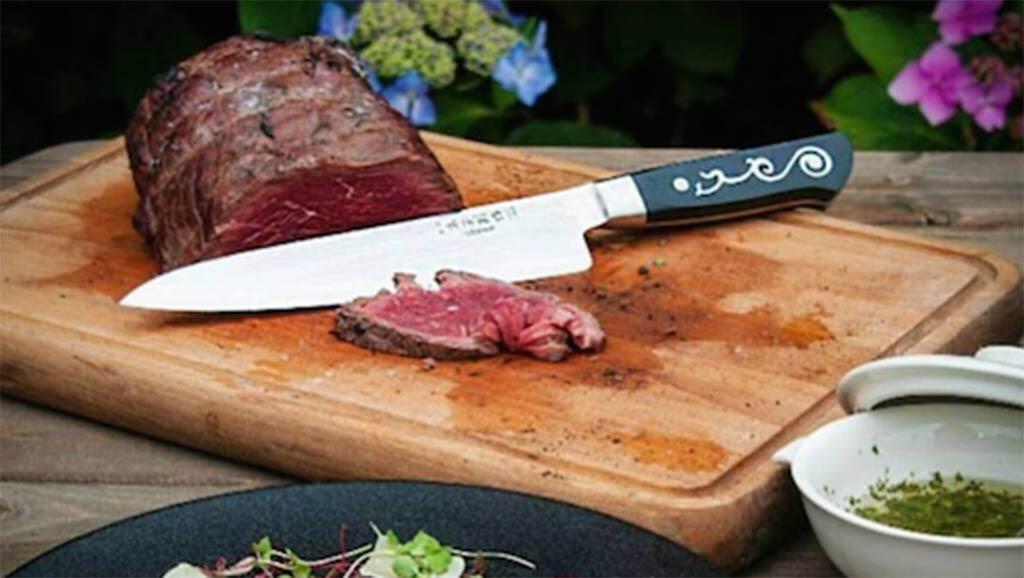 After working for twenty-four years as a flight attendant for a major Australian airline, Lee Smith made what might be seen as an unusual second career choice – she retrained as a butcher. But when you know her story, you’ll understand why this was the best thing for her to do!

Lee was 42 when she left the airline and and was living with her husband Peter in Northern NSW. Peter’s family has been in farming since forever (Peter is a third generation farmer) and Peter and Lee had – and still have – a small farm in Kunghur, half an hour’s drive from Murwillumbah.

The farm is not the family farm, it’s one that Peter and Lee set up separately, and they are very focused on natural and organic farming. Their animals – mainly pigs, goats and cows – are all grass fed and free range, and they meet the strict criteria for organically raised livestock. They make all their own fertiliser on site and adhere to the principles of ‘biological farming’, that is, according to GroundGrocer, a ‘chemical free method of farming that focuses on improving the microbiology as a way of increasing plant growth and produce yield’.

So Lee’s career choice made a lot of sense and as a result they now have an outlet for their own product, namely Lee’s butcher’s shop in Murwillumbah, Loades Butchery. You don’t see too many female butchers and Lee counts herself as one of only three in Northern NSW. She was able to complete her apprenticeship in two years and two months instead of the normal four as her previous career gave her quite a few exemptions for prior learning, in areas such as general food hygiene and customer service.

She says she has encountered her fair share of discrimination,

“When I first opened the butcher’s shop, I’d get a lot of the reps coming in and saying ‘is the butcher here?’, not realising I was the butcher and the owner of the shop.” says Lee. “A while back I needed to get my Nirey electric knife sharpener fixed and the local rep didn’t do anything, so I rang the number on the bottom of the sharpener and got through to the guys at Total Knife Care. Unlike many of the people I’d dealt with, they were very easy to speak to and were able to fix the problem for me in no time at all. Now I deal direct with them for everything to do with sharpening and maintenance. I can’t fault them for assistance and real customer service.”

By having their own butcher’s shop, they now control the entire supply chain, straight from paddock to plate. Well almost – they don’t currently have a restaurant, but Lee puts together recipes and does cooking demonstrations sometimes in the butcher’s shop, which are very popular. Lee also runs courses on sausage making and beef breaking (ie cutting up an animal and recognising the different cuts of the meat). They are planning on moving the butcher’s shop to the farm soon, where Lee will continue to sell their product and run the courses.

They have a very loyal group of customers who come to them because they know that all the meat is organic, and they supply meat that is preservative free, gluten free and nitrate free.

They pride themselves on how they look after their animals – pigs for example are prone to sunburn so they are currently interbreeding their pink pigs with coloured pigs to reduce this problem, plus they take all precautions to make sure their pink pigs don’t get sunburnt!

If you’d like to try some of their meat, they also trade under the name All Natural Meat Co and are regulars at the markets in Palm Beach, Currumbin and the Gold Coast Turf Club in Bundall, as well as having a Facebook presence. They even had a visit recently from Costa Georgiadis from ABC’s Gardening Australia – so, who knows – they might be on TV soon as well!

PS Photo is from Melbourne Cup Day and we’re guessing the team don’t dress like this every day!