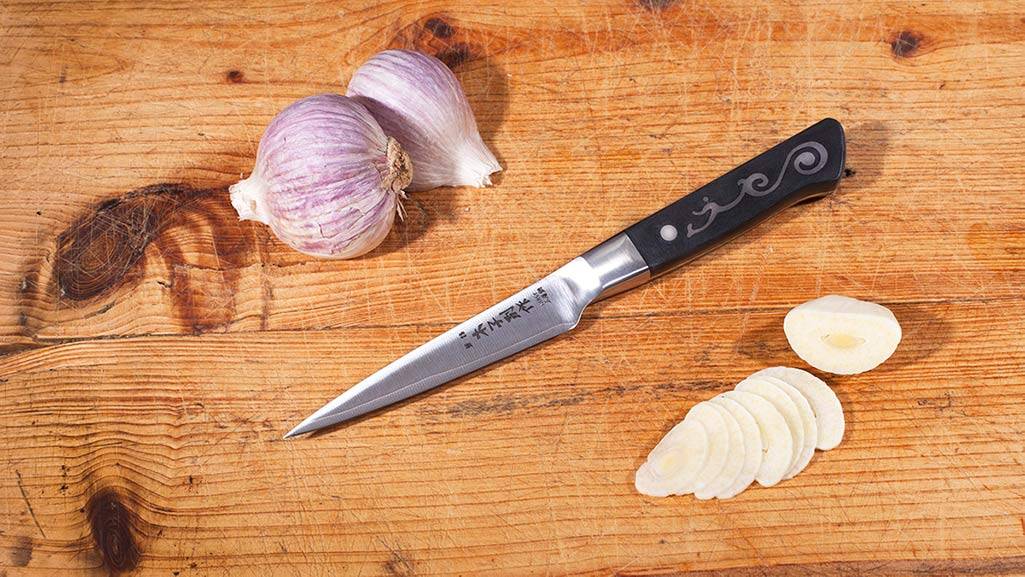 There is of course no limit to the number of different types of cooking and kitchen knives you can have in your collection and here at Total Knife Care we’d encourage you to put together the biggest collection you can, including of course our entire I.O.Shen and Bolt Action knife ranges.

But when you’re just starting, or where space is at a premium (perhaps you are a travelling chef and carry your knives in a roll), you need to pick just the most important knives for your collection.

The world of chefs and cooking seems to agree that there are four knives you must have. These are…

And with these four you can cover most jobs in the professional kitchen. Or the home kitchen.

Let’s have a look at these knives in a little more detail. Unlike the styles of cutting, which use some pretty fancy, generally French, names, knife names are much more descriptive!

A paring knife (pictured above) is a smaller knife that is used generally for intricate work. It’s the knife that is generally responsible for those intricately cut vegetables, or for de-veining prawns, taking out seeds from chillies. The word ‘pare’ means to cut away the outer edges of something or trim or skin something and is derived for the Latin word ‘to prepare’ (funnily enough the same word but pronounced differently) – prepare. Some people say that if your kitchen knife budget stretches to just one knife, then it should be a paring knife!

FYI Total Knife Care has not just one but three paring knives to choose from, from the I.O.Shen range – the 132mm Utility Knife, a 105mm Pointed Paring Knife and the 93mm Curved Paring Knife Knife, otherwise known as a ‘sheep’s hoof paring knife’. See the range here…

Designed specifically for removing the bones of meat and fish, of necessity boning knives have a sharp point and thin blade. Generally speaking, a thinner boning knife is suitable for chicken, turkey, game etc and for fish, and a thicker, stiffer blade is better for meat such as beef and pork.

Although these are the primary application for this type of knife, a boning knife can be used for much more – apparently it’s a good choice for cutting up mangoes as well! The main advantage of having a boning knife, particularly in a busy kitchen, is that the work just gets done quicker as there is less ‘fiddling around’.

This is the one that is probably the most used in a professional or home kitchen – generally a longer larger blade than the other types and probably the one that most chefs, if forced to pick one knife, would choose.

As you may have read on The Grind, chef’s knives are generally one of three types – French, German and a Japanese version known as a gyuto, which in fact means beef knife. Although the chef’s knife is a general tool in the kitchen, it was originally designed to cut through large hunks of beef.

It’s always handy to have a serrated knife for cutting bread and for some other jobs like cutting up tough fruit – larger fruit such as watermelon and pineapple. The main benefit of the serrated blade is that you can start up a sawing action without any danger of crushing the fruit or the fresh bread while trying to slice it. The only downside with serrated blades is that they are almost impossible to sharpen. Many chefs simply throw out their serrated knives when they go blunt and buy a new one.

TKC of course has a splendid serrated knife, which you can see here…

What do you think of the accepted wisdom? Do you agree with it or think it’s bunkum? Let us know in the comments below…