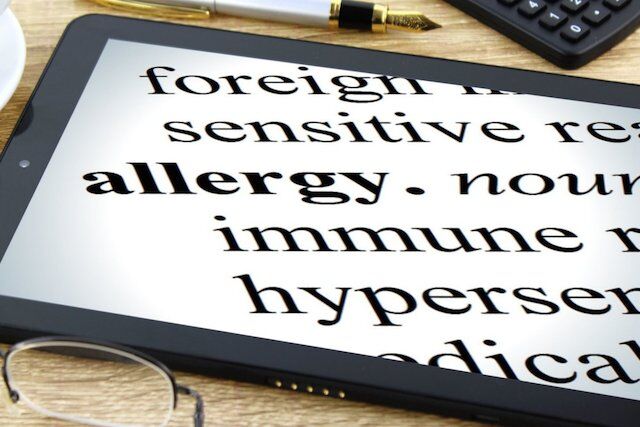 Next time you’re out at a restaurant, spare a thought for the chef, who now has to accommodate all the whims of an incredibly demanding clientele. Twenty years ago everyone pretty much ate everything, but today the chef has to cater for vegetarians, vegans, lactose free, gluten free (and any combination of the above) and more.

And although the use of the word ‘whim’ might be considered to belittle a big issue, there are serious consequences for a chef or a restaurant that accidentally serves a dish containing certain foodstuffs (often nuts or seafood) to someone who is violently allergic to them, especially if they have already been made aware of the allergy.

The number of people in Australia with known allergies is staggering – one in three Australians will have an allergy at some point in their lives, and one percent of all Australians will develop anaphylaxis – the most dangerous and potentially life threatening allergic condition.

Allergies and allergic reactions seem to be more common now than they were in the past and medical science doesn’t have a definitive answer, however there are a number of theories. These include…

• The ‘hygiene theory’ – increased use of cleaning products/anti bacterials has decreased our exposure to bacteria at a young age and as a result the immune system is not learning to identify infections or microbes, and then ‘overreacts’ when it comes across certain foods.
• Children being introduced at a later age to certain foods known to cause allergic reactions (eggs and nuts for example)
• People who have less exposure to sunlight (and so lower levels of Vitamin D) may be more susceptible to developing allergies, which may be linked to a more ‘indoors’ lifestyle
• Modern low fibre diets and/or regular use of antibiotics creating a change in the gut biome leading to development of food allergies

Whatever the causes, the business of preparing food for other people, whether for fun or for profit, has got a fair bit harder. The good news is that chefs today have access to the knowledge (Google it) and tools that minimise some jobs in the kitchen.

We’re thinking of the electric knife sharpener here, remembering what one of our interviewees told us a while back about how long it used to take to sharpen knives without one!

Talking of ways to simplify food preparation and cooking, IKEA recently weighed in with its own unique approach to getting the recipe right – the recipe sheet. Applying the same principle that led to IKEA self assembly furniture dominating the world, the recipe sheet uses a similar approach – a large roughly A3 ‘parchment’ sheet which has outlines of all the ingredient items on it.

Following the instruction to ‘cook this page’ you put all the ingredients into their outlines, bundle them together in the sheet itself and bake it in the oven. We had a quick look to see if this development was revealed by IKEA on 1st April but it wasn’t, so it must be true. However we’re not sure if this is just a gimmick or a ‘test’ product, as at this point we understand it’s not for sale – yet. Of course all the ingredients you can buy in the food section at IKEA.

Finally… we can’t help but be seduced by all the promises of robots and artificial intelligence taking over in the kitchen. The Thermomix is of course already here, but another contender arrived a few weeks ago at a trade fair in China – a robotic cooking machine developed by a man motivated by his wife’s complaints about his cooking. It – apparently – has resulted in no more complaints from his wife and comes with the added benefit of cleaning itself afterwards, thus avoiding another chore.

However it doesn’t chop up the ingredients, proving yet again that the humble kitchen knife is here to stay for a little while longer!