Forget Masterchef – this is where the action is.

We covered the resurgence of the barbecue, especially the slow cooking side and particularly in the US, in our article The latest trendy cooking technique – the barbecue back in September last year, and it was one of our predicted food trends for 2018 at the beginning of this year. Now, at the halfway point, we realise we may have somewhat underestimated the level of this trend… 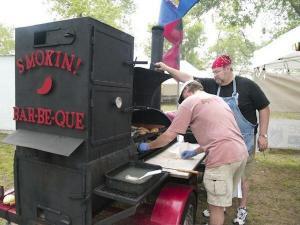 Of course in the US they always have to do everything bigger and better, and particularly in Texas, but the sheer scale of popularity of competitive barbecue there is hard to believe. One Australian competitive barbecue team, the Manning Valley Natural Smokers from the NSW mid north coast, earned the right to go over and take part in the ‘World’s Championship Bar-B-Que Contest’ in Houston earlier this year by scoring well in a local competition held in Port Macquarie.

As you might expect, the Texan event was pretty big – 200,000 attendees over a three day period (it was combined with the Houston Livestock Show and Rodeo, so not everyone was there just for the BBQ competition) and the Natural Smokers were up against some of the most competitive teams in the world.

So you will be delighted to hear that they did pretty well, scoring just half a point less than the overall brisket category winner and becoming the first non-US team ever to get into the top ten. What made it even better was their choice of meat – Australian Angus beef (which they brought over with them) putting on a pretty good show in arguably the beef capital of the world.

While here in Australia we may not be putting on such big events, the ‘sport’ (if you can call it that) is definitely growing fast, from twenty teams competing three years ago to around four hundred now at forty annual events around the country. The net result has been a big increase in sales of the specific type of barbecue equipment – the smoker, and all the accoutrements (like for example the I.O.Shen Miho Slicer, designed by UK chef Marcus Bawdon and UK BBQ specialist Dr SweetSmoke specifically for barbecuing).

A competition generally involves low temperature and slow smoking (‘low and slow’) a variety of different meats, generally brisket of beef (a section of the animal from between the legs), pork ribs and then chicken and lamb. The brisket can be the most demanding as it’s a fairly tough cut and takes around six hours to barbecue properly.

Quite coincidentally (!), Total Knife Care now sponsors Tony Gimellaro and his competitive BBQ team, The Beard and The BBQ and you’ll see them wielding a few I.O.Shens at their next competitions in Bangalow – Bangalow BBQ & Blugrass 17-18 August, and at Burleigh BBQ Championships 25-26 August. And we also sponsored the Bristles BBQ team at their recent outing at Baconfest in Kingaroy.

Tony and his team recently put in an impressive performance in competition a few weeks ago at Smoke in Broke, coming in sixth overall. Mind you, they were up agains the Manning Valley Natural Smokers!

If you’re interested in going along to one of these competitions, either as a spectator, competitor or even judge, a good website to check out is the Australian Barbecue Alliance (yes, there is such a thing) – http://ausbbq.com.au/. Perhaps we’ll see you at one of the events.

By the way, economist Jason Murphy thinks he knows the reason why US style barbecue has become so popular in Australia – it’s a combination of lower airfares to the US and the relative strength of the Aussie dollar that has given a lot more Australians a taste for US style barbecued food. For what it’s worth he thinks Indonesian food is the next big trend.