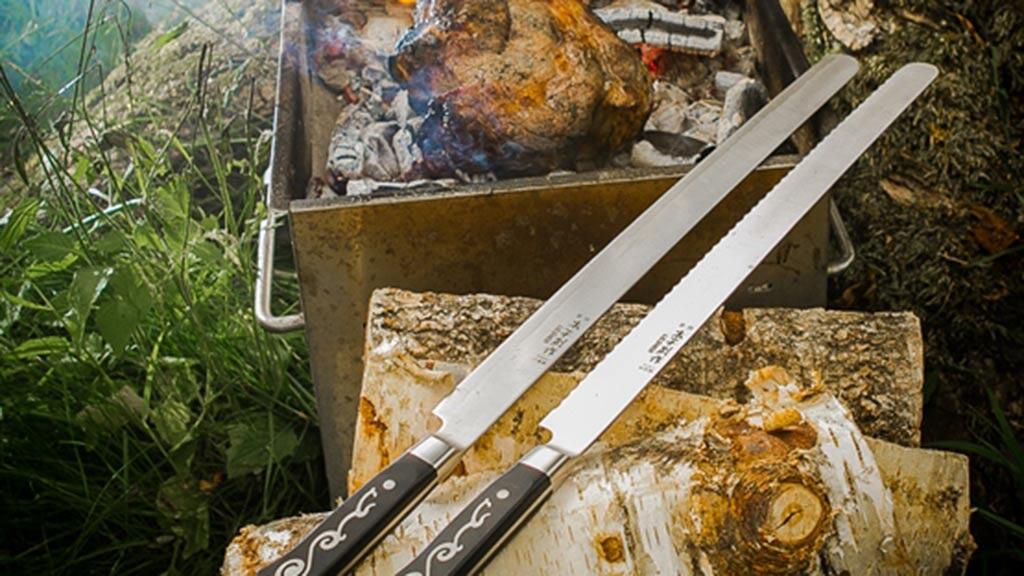 Last month – as you may know – our very own I.O.Shen added several new knife models to its range. Of course all of these are in the Japanese professional chef style, but a number of them were designed for barbeque cooking*, and in fact in some cases designed by chefs specialising in this type of cooking.

It’s a bit of a stretch to call the humble BBQ a trendy new cooking technique – in Australia we reckon we invented it, and we’ve always been keen BBQ enthusiasts. But the truth is, it wasn’t invented down under.

The word actually originates in the Caribbean – ‘barbacoa’ – which in fact wasn’t a barbeque as we know it, but a small wooden structure that the Taino Indians used to smoke food. The Spanish took the word home in the 1500s and it first appeared in print in 1526, and was referred to for the first time in English in a 1697 book called ‘A New Voyage Around The World’, although the author was referring to the small structure – a frame of sticks – being used as somewhere to sleep. In 1733 the meaning of the word morphed into something closer to its modern usage – a place to hang around outside while cooking meat. Samuel Johnson acknoweldged its Caribbean origin in his 1755 dictionary…

“to barbecue. A term used in the West Indies for dressing a hog whole; which being split to the backbone is laid flat upon a large gridiron raised about two foot above a charcoal fire, with which it is surrounded”

The irony is that the Taino Indians probably used their barbacoa to cook fish and other seafood, not great hunks of meat. Australia’s reputation as a nation of barbecuers (or is that ‘barbequers’?) was cemented by none other than Paul Hogan when he uttered that immortal phrase “throw another shrimp on the barbie’, although what he actually said was “I’ll slip an extra shrimp on the barbie for you” in a TV tourism ad for Australia. Of course he had to say shrimp, not prawn, as the ad was primarily shown in the US (and apparently it worked pretty well).

On the other hand France is not really known as a nation of barbecuers, even though one – wrong – theory of the origin of the word is a combination of the French words ‘barbe’, meaning beard and ‘queue’ meaning tail, suggesting that’s how you roast a pig on one (from ‘beard to tail’). The only genuine contribution to the English language from the French connected to the humble BBQ is that the word ‘buccaneer’ derives from the French word for someone who looks after the BBQ – the ‘boucan’.

Fast forward several hundred years to today and barbecues are experiencing a bit of a resurgence around the world. The latest trend (although of course it’s all been done before) is the smoker barbecue, which – done right – gets you a beautifully cooked brisket, US style. And even though meat seems to be the food of choice for 97% of barbecuers, fish and vegetables also turn out pretty well on the BBQ when you know how to do it.

And that theory about the BBQ being the domain of the male/s in the family – in another interesting snippet from history… it was most likely the Taino Indian women that looked after the original barbacoa, not the men.

…and how slow cooked/smoked BBQ meats are the new trend…

*particularly the Mizu Scalloped Slicer and the Miho Slicer