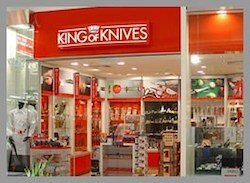 The city of Mackay in Queensland is nearly 1,000 km north of Brisbane and has a population of around 167,000. Founded in 1860 and named after the leader of an expedition to the area, John Mackay, it is now the centre of the sugar industry in Australia and is also the gateway to the Bowen Basin coal mining region.

Maxine Payne and her partner own the King of Knives franchise in Mackay.

“Most of our customers are individuals looking for products for their kitchens at home, but we still see a lot of cattle farmers, hunters and fishermen as well as people working in commercial kitchens.” says Maxine. “The mining industry as you know is in a state of flux at the moment and that does impact us here, but we are also seeing new mines opening in the area.”

“People have become very ‘retail aware’ lately and are looking for value for money. We’re still getting the same number of customers coming in, but average spend has decreased as people watch their hip pockets a little more.” Maxine says.

Having worked in retail for over thirty years, with the last seven running the Mackay King of Knives outlet (and in the jewellery business before that), she has seen a lot of change in that time.

“We used to stock another brand of electric knife sharpener, and that was the only brand we had. The Nirey range are more expensive than the other brand, but we took on Nirey a few years ago and we haven’t really looked back.” explains Maxine. “We have very few customer complaints with the Nireys – they pretty much do what they say they’ll do, even though they are a little more expensive than their competition. We don’t preference Nirey over other brands, but we do point out that they are very easy to use and that they just keep working – they very rarely need replacement parts, whereas the other brand we stock needs to have certain parts replaced regularly. As a result we sell about a hundred Nireys for every one of the other brand.”

Although they are very reliable, on one occasion a customer came back saying that his Nirey wasn’t working. She replaced it immediately with another and sent the offending machine back to Total Knife Care. TKC checked it and found that it was simply that the machine hadn’t been closed properly and so the blades weren’t engaging.

“The aftercare service from TKC is unrivalled and that’s what gives us the confidence to recommend the Nireys. It’s rare that you get this level of service from suppliers.” says Maxine.

“I.O. Shen knives are in the upper/middle price bracket of the kitchen knives we sell in the store.” she explains. “We listen to our customers and advise them based on the sort of use they are expecting. If a customer needs a good knife that can take a little more ‘abuse’ in the kitchen, the I.O. Shen is the one we point them to. Not only does it keep its edge really well as it is made with pretty hard steel, another good point is that the handle doesn’t heat up as much as other knives if it’s left near a heat source – some knives you can’t pick up if they’ve been left too close to the cooktop. I.O. Shen is also quite a large range, so customers can always keep adding to their collection.”

The only TKC range Maxine doesn’t stock is the hunting/fishing style Bolt Action range. But now that Mother’s Day has been and gone, she says she can start looking at making the store a little more ‘male orientated’. But shouldn’t the Damascus Bowie Knife be in everyone’s kitchen drawer?