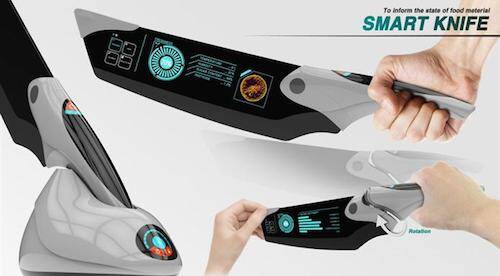 At Total Knife Care we reckon we’ve got the best kitchen knife of the present (the I.O.Shen range, of course), but what sort of kitchen knives can we expect to see in the future?

If you put an I.O.Shen knife in the hands of a chef or a cook from the 1600s or 1700s, they’d probably have a pretty good idea how to use it. They might be pretty impressed by how light it is, and how amazingly sharp it is, but they’d still be able to tell it was a knife (check out our previous article on the history of the kitchen knife).

Maybe not so with a knife design on show in the Electrolux Design Lab. A student at Daegu University in Korea has come up with a futuristic design for a knife that would do way more than just cut things.

Instead the knife doubles up as a sensor of information about the food that it is cutting, with readouts on the knife itself showing data on how fresh the food is and whether it has any bacteria on it. In addition the knife is designed to emit negative ions, in order to prolong the freshness of the food being cut and to ‘block decomposition by ethylene gas’. To top it off the knife would also report to you the presence of major nutrients, and what carbohydrate/fat/protein is present as well as sugar content and pesticide content.

The only problem we can see is that if you’ve already bought the food, you’d be a bit cheesed off if you had to throw it all out and go shopping again. But on the other hand it’s better than getting food poisoning.

Perhaps a little further into the future is the possibility of making knives that are sharp at an atomic level, using nanotechnology. A field of study called ‘molecular nanotechnology’ promises the possibility of tools being assembled at an atomic level, and knives built using this technology could be incredibly strong, totally resistant to rust and super sharp, as well as being self repairing and self maintaining.

Until then we suggest you continue to use your I.O.Shen knives and your Nirey sharpeners, plus we promise we’ll be the first to stock the first molecular nanotechnology superkitchenknife!