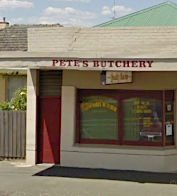 Peter Loughnan’s lifelong career as a butcher began when as a kid the local butcher stopped him on his paper run and asked him to do a couple of deliveries for him. He didn’t think much more about it, doing a few odd jobs here and there as well as the deliveries while he was studying at the local Ballarat technical college. It was the butcher who told him he could do an apprenticeship with him and at the age of 15 that’s what he did.

“It was very different fifty years ago,” says Peter. “there were four or five people working at the butchers then, sawdust on the floor and everything was cut up at the butchers shop and then hung up. We didn’t have any refrigerated cabinets and everything was chopped on wooden blocks, which were banned for being unhygienic, although now they’re finding out that the old wooden blocks are really more hygienic than the plastic ones that replaced them! We worked long hours as well – every Wednesday we’d be in at 3am and only finish at 8pm or 9pm at night after making all the beef dripping.”

Peter doesn’t really regret the changes that have happened over the past half a century – it’s certainly made the job a lot easier, for example a lot of the meat is now already pre-cut when it arrives at the butchers, and beef dripping has gone out of fashion a little! Although he has worked in the same shop for over fifty years, he only took over as owner in 1985. In that time he’s had a very loyal group of customers, except now it’s his original customers’ children and their families that are coming in to be served.

With meat now being cut up at the abattoir, the modern generation of butchers are not learning how to ‘break up the beef’, and so Peter also does classes for catering students at the local School of Mines, showing them how to do it and showing them where the different cuts of beef come from.

Tastes in meat have also changed, with many cuts now popular only with the older generation – beef brisket and ox tripe being two that he mentions.

The amount of time Peter spends keeping all his knives sharp has also dropped dramatically since he got hold of his Nirey knife sharpener.

“A mate of mine was selling the Nirey sharpeners to fishermen a few years ago, and he showed one to me. Before the Nirey it would take anything up to an hour to sharpen one knife the old fashioned way – half an hour on a hand-turned sandstone waterwheel followed by another half an hour on the oilstone. We always used any downtime in the butcher’s shop to sharpen our knives. Now with the Nirey I can sharpen a blade in five to ten minutes, and the blade is just as good, if not better.”

Peter misses some aspects of the old ways of doing things, but he doesn’t miss the huge amount of time everything used to take. He’s still in the shop twelve hours a day during the week and on Saturday mornings, but he doesn’t have to get up at 2am or work until 9pm any more, and he’s looking forward to hanging up his knives for the last time in a few years. At least they’ll be sharp.

Peter in the news…